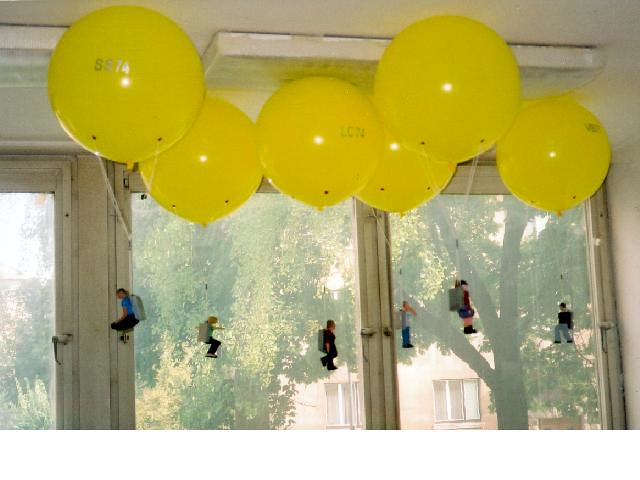 I made models of six study colleagues and friends at the same time. I equipped them with suitcases in which their artwork was documented and a text which persuading the finder to return any kind of information on the artist to the given address.

Equipped like this I let them go with the help of helium balloons, from the backyard of the Academy of Fine Arts into the air, to the public.

Because the balloons contained helium forecast that for 24 hours they could be blown in all directions all over Slovenia and maybe even farther. The weather conditions, direction and intensity of the wind and other barriers on their way, influenced the direction of the balloons. The models could land practically anywhere on inhabited or uninhabited region.

Symbolically this could mean the passage of the studied artists from university to the public and their destinies, which would follow in their artistic lives. On the other hand this action could also mean a kind of promotion for them, a new way of communication, where the artist would comes to the visitors home and not as is usual visitor coming in to the gallery. I wanted to communicate with this coincidental public and get some information in return from them.

After a few days a boatman Josip from the Croatian side of the Kolpa river contacted me and told me that he had found one of the flying artists – Polona Lovsin in the woods and said that he was very enthusiastic about this kind of project and that the found of that day would always stay in his memory.
With that, I could say that the art had found its public meaning. I do unfortunately not know the destinies of the others.

Friendship and public art are two main topics, which appear in this project.